This is a safety management system for fire and gas detection. It collects the detection signals of the fire button, smoke, fire, combustible gas, and toxic gas at the chemical plant site, and controls the alarm lights, alarm bells, and rain through software logic output. Shower valve, foam valve and fresh air inlet valve of air conditioning system, etc. 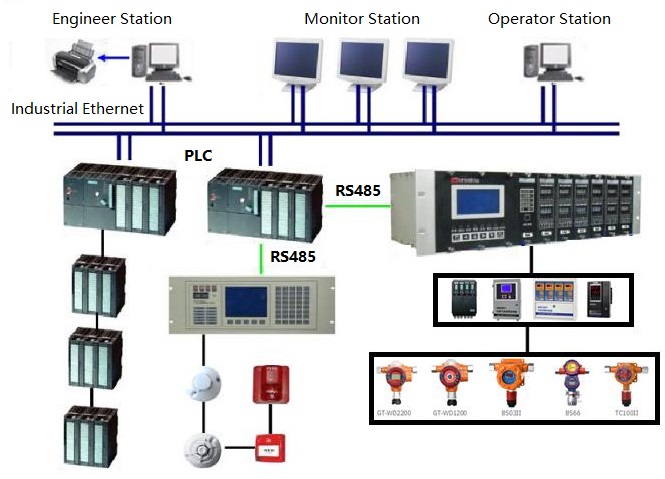 The F&G system conducts continuous online monitoring of the scene through various on-site equipment, detects fires and existing fire hidden situations in time, and takes decisive measures to control the occurrence and further spread of the fire, so as to achieve the purpose of protecting personnel and facilities. Under normal circumstances, the fire and gas systems are connected to the broadcast system. When a fire occurs, the broadcast system will immediately activate the fire alarm and the platform will enter the fire emergency plan. The emergency commander will be able to determine the location of the fire through the fire and gas system workstation or the DCS interface to guide the search team and the fire fighting team to the scene as soon as possible to extinguish the fire. At the same time, the fire and gas system is generally connected with a corresponding emergency shutdown system. In the event of a fire, the emergency shutdown system will issue a shutdown command according to the alarm level of the fire and gas system to ensure that the accident is controlled.

The design concept and technology adopted by the F&G system have the same reliability and availability as SIS, and at the same time have a higher degree of automation. In general, it has the following characteristics:

Reliability: Each key part has self-diagnosis function through redundant design and multi-level data backup system.
Practicability: According to the actual situation of the production equipment, a logic control program suitable for the current production management can be designed, and a large amount of information can be displayed on-site through a simple screen.
Real-time: With ms-level response, various events can be displayed in the operation or monitoring station in time.
Expandability: Based on PLC technology, it has a large-capacity, modular structure, which is easy to expand; the flexible configuration software can be expanded according to on-site process requirements.
Compatibility: Integrate various sensing technologies such as smoke, temperature, light, gas, pressure, etc.
Flexibility: 4-20mA, RS-485, switch, industrial Ethernet and other ways to communicate with DCS, PLC, ESD and other systems.

For all inquiries, please fill in the form below (* are required) to send us a brief message, and we will get back to you as soon as possible.